After several years of emotional and physical struggle to complete her Bachelors from ASU in Design Studies, Natalie found herself sinking into a feeling many recent grads become mired in. She was uncertain of her path, worried that she had wasted mountains of money and years of her life on an unfulfilling career path, and couldn't see through the fog of fear that began to form around her. She knew on a visceral level that her soul longed to express itself creatively. However, no plan that she was able to forge in her mind painted a picture that she felt truly passionate to pursue. The only thing she knew for certain was that Corporate America would never be her home, and that she was determined to become her own boss. Sadly, like a self-fulfilling prophecy, Natalie wound up in a call center after graduation and could feel her happiness slipping away each day.

Later 2011, after a series of “rock bottom moments,” Natalie decided to turn her attention toward her health and wellness to try and recalibrate, by participating in a 30-day hot yoga challenge with friends. Though she had previously practiced informally, this was her first fully-immersive experience into the world of yoga.

Antonieta Hensley: Standing Strong in Her Message as a Yoga Teacher and Hypnotherapist

When it comes to discovering Southwest Institute for Healing Arts (SWIHA), Antonieta Hensley has Google to thank! “After I saw all the courses, programs, and classes they offered, I was sold. It sounded like a temple or a mystery school available in the states and I knew it was calling for me before I ever stepped foot on the school grounds.”

Antonieta graduated from the 600-hour Mind Body Wellness Practitioner program. She also went through the Yoga Teaching Training, Transformational Life Coaching, and Hypnotherapy programs. She went on to share how her time at SWIHA dramatically changed her life for the better:

“The laws of attraction, eastern philosophies, energetic body healing, taboo subjects, and spirituality have always fascinated me. But that is only about 10% of what the school has to offer. It surpasses your expectations on both what you can learn and whom you can meet. There is no need to search for a guru in India or Thailand. With SWIHA you can become your OWN guru.” 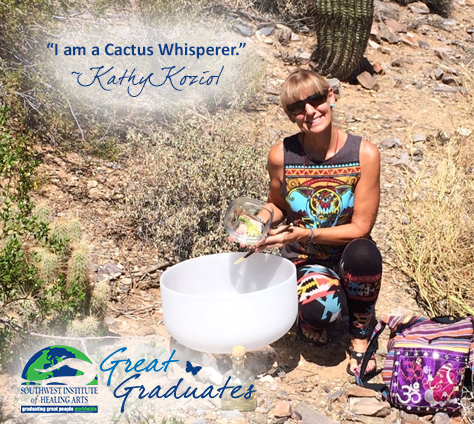 With the saguaro cacti in bloom, I am reminded of the very first floral essence I created. It was a memorable experience that produced a potent brew! I’d love to share my story with you:

First of all, I am a Cactus Whisperer.

I have had a connection with plants my entire life. It’s a gift that was given to me by my mother. Since I love plants so much, I took the Flower Essence Course at the Southwest Institute of Healing Arts in July of 2014. I loved the class and bemoaned the fact that I would have to wait almost a year to create a flower essence from my favorite of all cacti, the saguaro, since their blooming season is in the April-May time frame.

Before I continue with my story, you might be wondering what a flower essence is. A lot of people mistakenly believe that flower essences hold the fragrance of flowers, when in fact flower essences actually contain the vibrational energy of the plant. They are taken orally (a few drops in a cup of water) versus a topical application, and they hold no fragrance.