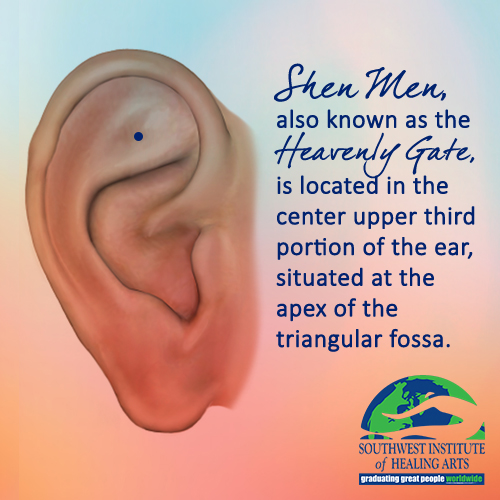 Imagine a gate that connects the mysteries of the heavens to what we could manifest here on earth. Just the thought of such a portal sounds kind of Star Wars-like, doesn’t it? And yet, there is a potent ear point that has been written about as far back as 500 BC in a timeless book known as The Yellow Emperor's Classic of Internal Medicine, a compilation of acupuncture procedures that were practiced since ancient times.

This mysterious point is called ‘Shen Men’, which translates to ‘Spirit-Gate’. It is the point believed to connect heaven and earth, mind and body; it brings imbalance or disease to a restored balance and facilitates healing. It is one powerful point!

‘Shen Men’, also known as the ‘Heavenly Gate’, is located in the center upper third portion of the ear, situated at the apex of the triangular fossa. It is one of the most recognized auricular points and used in the treatment of a wide variety of conditions, including pain sedation, addiction abatement, and the reduction of physical and emotional inflammation. By stimulating this tiny pin-sized point, it is reported to bring heavenly energy into the body for healing. Many practitioners and teachers believe we can actually heighten our spirituality just by taking three to five slow, deep breathes while activating this ear point a few times a day!