Janet Lee’s unique style of coaching is deeply personal to her. Her own challenges, experience in therapy, and, ultimately, finding her own wellness led her to pursue her passion for healing. Janet’s philosophy is that mental and physical health are profoundly interconnected. From how we interact within our relationships to what we choose to eat, it all affects us in a much bigger sense than we may initially realize. “I firmly believe in the power of a decision, she shares. “One small decision can transform a person’s life. It has in my own life many times!”

As a graduate of the Holistic Nutrition Wellness Practitioner program, Janet believes that everyone is capable of becoming their best selves and living an abundant life. Though Janet’s original focus was on the nutrition aspect of her education, she says that taking the first twenty-hours of Life Coaching during her program was a pivotal moment for her, opening her eyes to the possibilities of integrating the two tools. “I was hooked, she says. “I completed the remaining hours, and I’m so glad I did... I really believe I would not be nearly as effective without coaching being a part of my awareness and skill set.

Life Coaching taught Janet how to connect to others, ingrained in her the importance of a healthy client-coach relationship, and gave her valuable tools to use with her nutrition clients. “I love the synergy between Holistic Nutrition and Life Coaching,” she confides. “I love the insight I gained from doing the work and how I can share that with clients. I love that I have worked through the layers of growth so that I am not afraid to hold space for others. I love to help a client see that one small change in one area has a huge impact in another. They may not realize it at the time, so when they finally do, it’s magic to watch unfold.”

One of Janet’s greatest client success stories is that of a woman she refers to as “Ellen.” Ellen was an excellent student and attended every SWIHA class that Janet held. She was drawn to Holistic Nutrition after her husband’s cancer diagnosis because she wanted to support him in developing a healthier diet. In their one-on-one sessions, Janet utilized the Wheel of Balance, and Ellen was able to see the imbalances that had been created by her recent struggles. She quickly found out how important the emotional component is in any lifestyle change and totally embraced a plant-based, whole food diet. 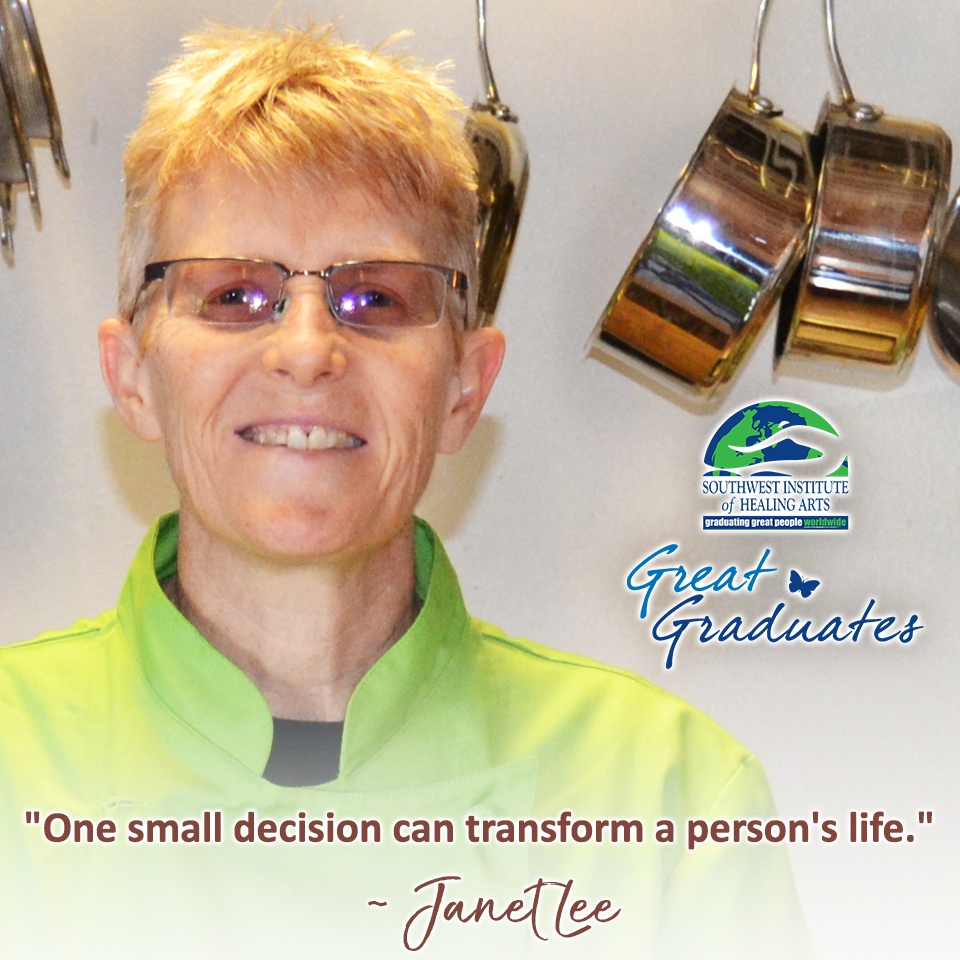 “Her greatest strengths,” Janet says, “were her focus on getting to the root cause of her challenges. She was a joy to work with because her willingness to do whatever it took to be healthy was her main priority.” Janet introduced Ellen to the mind-body connection through meditation, pendulums, angels, and intentional eating. Ellen enjoyed the food classes so much that she even made the decision to attend the premier raw culinary school in California and is now educating others in the community about the merits of this style of eating. Four years after coaching with Janet, Ellen is still diligent in her daily habits, maintaining her plant-based diet and reporting excellent health! “She is proof that you can change your life at any age and find excellent health when you allow your mind to be open to new possibility,” Janet shares.

For Janet, the most rewarding part of the coaching process is serving as witness to the changes in a person’s life: “I get energized, inspired, and excited to see a person realize that they are more than they believe they are, that they can do more than they think they can, and that they deserve the best life has to offer. My joy in serving others is in the reward of someone not needing me because they feel empowered to try something on their own!”