Living Large: How Deena Gregory Left Behind a World of Luxury for the Call of the Great Outdoors

Deena Gregory has always been a “seeker”—a woman with a self-described “natural curiosity about self and spirit” who in quiet moments often found herself gazing upward at the night sky with a deep sense of awe. Yet, after years of looking to institutions—from organized religion to the halls of academia—for the answers that could only be found within, Deena got caught in a spiritual drought, convinced that there was nothing else bigger “out there” than the humdrum of everyday human life.

“With a new reliance on my own thinking came what the Buddha referred to as ‘Dukkha,’ or suffering,” she explains. “I have always been hailed as a ‘critical thinker.’ Now I laugh and say, ‘Yes, as soon as I start thinking, things get critical!’” 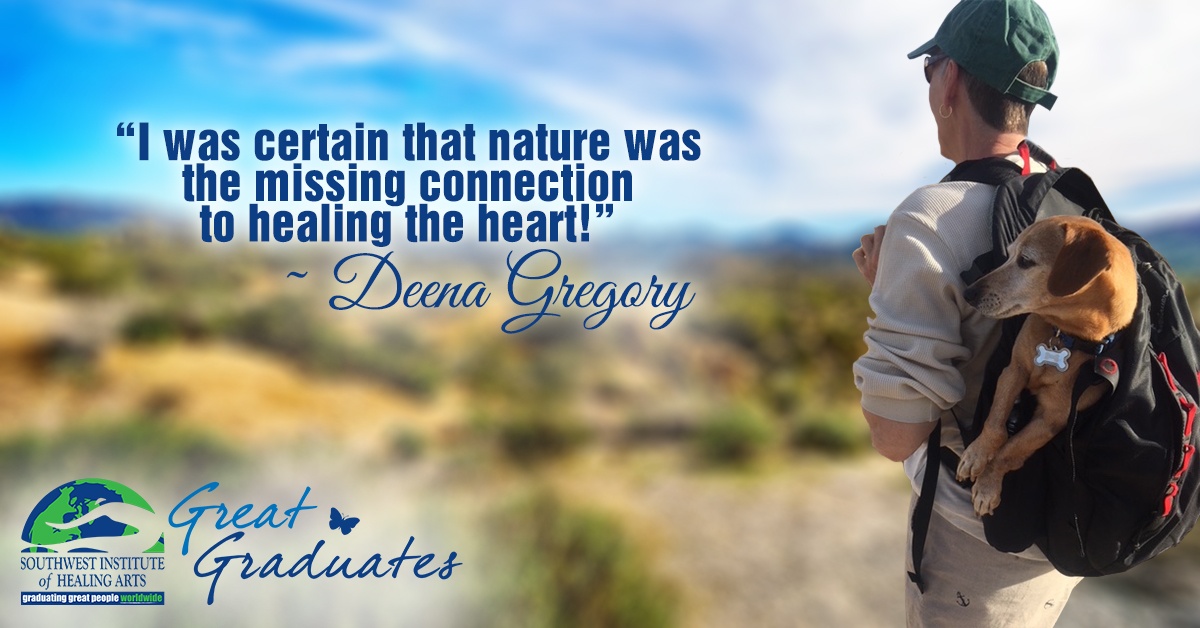 By 2010, Deena found herself 13 years into a 15-year relationship with a woman she loved and shared a business with, yet who was also an alcoholic. “Unbeknownst to me, a doctor had prescribed her Xanax for her anxiety, and a ‘friend’ was also supplying her with other highly addictive benzodiazepines,” she reflects. “We lived on Glorietta Bay in the Coronado Cays, San Diego, with all the trappings of living large.” Despite all outwards appearance, however, the creature comforts and beauty of Deena’s surroundings could not counteract the constant struggle of living and loving an addict.

“One day while at a bookstore, I picked up Why People Don’t Heal and How They Can by Carolyn Myss,” she shares. “Of course, I bought it with the full intention of finding out why my partner wasn’t able to heal and how I could facilitate her healing. You can guess how that story panned out… the message was for me instead. My healing began, slowly yet surely, until I could surrender to a power greater than myself. One day, I looked around at the marble floors, the Tommy Bahama furnishings, the French Provincial kitchen, the palm trees against a crystal clear blue sky, and as the tropical breeze gently graced my face, I said, ‘I’d rather by homeless than in this situation any longer.’ As soon as the words came out of my mouth, I swear I could hear an angel snicker, and I said, ‘Oops!’”

The Universe certainly did not let this private observance go unnoticed. Within four months, Deena had lost her home, her business, her financial security, and all her illusions. Not quite ready to give up on the traditional path, Deena packed up what little she had left and took off, determined to use her experience and credentials to find a new job in the same field.

“Alas, the journey was fresh, and the humiliation had just begun,” she recalls. “Sleeping on couches, borrowing money, being rejected at interviews after being told that my resume made me a perfect fit… I was sixty years-old with no home, no savings, no pension, and no job prospects. I tried to blame my unsuccessful job search on age discrimination to save face. Then I remembered the funny feeling I got when I let that prayer for extreme change slip past my lips. Perhaps it was time to let go of my narrow idea of what was in my best interest because someone else obviously had another idea. So, I sat… and waited… and sat some more. ‘Okay, what you know how to do is not working,’ I told myself. ‘So, what do you want to do? What do you LOVE to do?’”

Deena decided to move in with her daughter in Seattle, and as a result, she ended up spending a lot of time outside with her granddaughter, planting flowers and growing vegetables:

“Digging around in the dirt brought a kind of peace I hadn’t felt for a very long time. I rediscovered my love for the outdoors and my love of the earth, soil, dirt! I felt peaceful when my hands touched the soil. It became more than just gardening; it was a spiritual experience that began healing my wounds and opening my eyes to a much bigger picture of life. I started to recount the pivotal role nature played in my childhood and my summer camp escapes from an abusive home. I recalled the backpacking trips sleeping under the stars— how they shaped my beliefs and offered a sense of security and belonging to something much bigger. All I knew for sure was that the peace I now felt was genuine, and I would not settle for anything less ever again.”

So once again, Deena set an intention that was answered by the Universe; within a year, she was employed as a landscaper. “I spent my days among the plants and trees, silently absorbing the healing energy from the soil and every leaf, blossom, and branch,” she says. “I was certain that nature was the missing connection to healing the heart and soothing the mind. I felt strongly that I needed guidance.”

After six months of searching for a school that was the right fit, Deena enrolled in the Holistic Wellness Program—now known as Mind-Body Wellness—at SWIHA. She began her studies with a focus on Nutrition and Urban Farming, moved by the feeling that each class was drawing her deeper on her spiritual path.

“I could easily see and feel the connection between the energy of the soil, Earth, and all living things in relationship to Farming, Nutrition, Ayurvedic principles, Hypnotherapy, and Transpersonal Psychology,” she explains. “The spiritual guidance I received through my classes on Intuitive Studies, Prayer Therapy, Meditation, Mindfulness, and Comparative Religions helped set my course toward serving those with insurmountable burdens: single working mothers who are the sole supporters of their families.”

Deena was inspired to work with this demographic after witnessing her own daughters struggle as single working mothers without financial support. “They were constantly stressed. Trying to pay bills and make ends meet always took precedence over a walk in the park or a weekend at the beach,” Deena confides. “When I found out that there are nearly five million single mothers who are the sole supporters of their families, I began devising a plan. What if there was a way for these women to be at peace, if only for a weekend or a few days? What if they could take that stillness with them to cope with the chaotic world in which they live? I put that prayer out into Universe and received a reply: I would teach them what it means to live a Still Life.”

The result is a one-of-a-kind program known as the Still Life Experience, which facilitates camping retreats for single working mothers in order to acquaint them with the experience of being one with nature and the mechanics of camping. The program—which is sponsored by a non-profit organization in Washington called Cascadia Now—also offers customized life guidance and therapeutic modalities, such as Toe Reading, Neurolinguistic Programming, Meditation, and Yoga. The retreats will begin in April 2018 at Joshua Tree National Park and will continue through September 2018 at six other National Parks across America. Deena, who will migrate from one location to another in the 18-foot travel trailer that she now calls home, also plans on sharing with these women the four most important things she has learned on her own journey: “Be still… Be still and know… Be still and know that I AM… Be still and know that I AM God!”

Deena concludes by recognizing the tremendous influence that SWIHA has had in shaping her path. “Because of the great spiritual teachings offered in my program, I am no longer at odds with the Almighty and have been able to clearly define who, how, and what that means in my life,” she says. “I have always been one who lives by the premise that I will not require of someone else that which I am not willing to do myself. In order to bring healing to others, I first had to experience it for myself. SWIHA facilitated that healing. I am honored to be part of such a loving, healing community, and I hope you all like to camp because I’ll be calling on you to come and minister to the wonderful women at my retreats!”