Heal Yourself to Heal Others: Michael Anthony Suszczynski‘s Journey to Purpose

“If you see me walking around,” says Michael Anthony Suszczynski, a graduate of SWIHA’s Mind-Body Wellness program, “I can gladly give you ten miraculous stories.” The key word in that invitation is walking, because a debilitating back injury twenty years ago left Michael unable to do anything except crawl.

In an attempt to repair the damage to his back, Michael underwent a surgery followed by six months of intensive physical therapy – three hours a day, three days a week. Despite the attempts of the doctors, physical therapists and Michael’s own dedication to his health, his body was not responding in the way that they’d anticipated. He had no strength in his left leg and began to lose hope that he’d ever walk normally again.

When the surgeon who’d performed the procedure admitted that he had no idea why Michael hadn’t fully recovered, Michael’s mindset began to mirror his physical body and he developed severe anxiety. He sought out psychologists, psychiatrists and anti-depressants, with none of them offering any relief.  The emotional pain on top of the physical agony of his injury was becoming unbearable.

“One day someone mentioned that there was a local hypnotherapist that I should try. I was so desperate,” he admits “I was ready to try anything.“

During Michael’s very first hypnotherapy session, a childhood trauma that he’d kept hidden for decades was unveiled as the source of his pain and anxiety.

“It was something I was fully aware of but promised myself I would never talk about—except my body was screaming out for me to speak about it.” 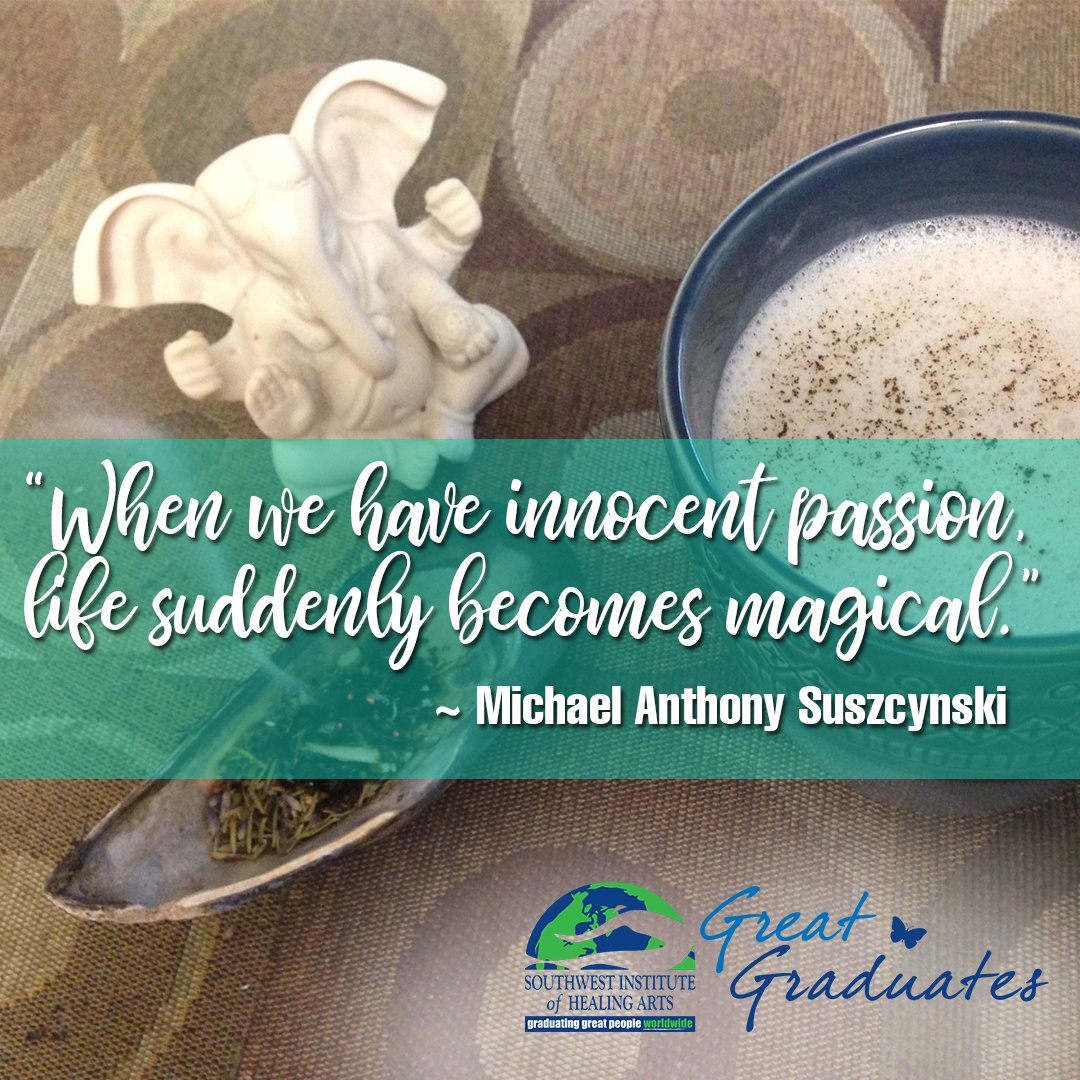 By releasing and re-framing his past trauma, he found relief from the anxiety within the first few hypnotherapy sessions. What’s even more amazing is that, as his mental health improved, his body began to regain strength as well! The journey to healing had begun.

When Michael’s back problems started to return a few years later, he researched various forms of energy work. He decided to explore Reiki, however his hunt for a skilled practitioner wasn’t yielding many promising results. That is, until he happened to overhear a colleague taking about an amazing Reiki session they’d received—and, better yet, the Reiki Master was just minutes away from where he worked!

The day after his life-changing Reiki experience, Michael boarded a plane to Phoenix to visit his friend. On the flight, something strange happened—he began to see what he describes as energy orbs dancing around the other passengers.

“Something even more dramatic happened when the plane touched down in Phoenix Sky Harbor,” Michael reveals, “The second the wheels hit the ground, I had an overwhelming knowing that I was now home. I knew right then and there—without seeing any of Phoenix except the dimly lit runway—that I was moving to Arizona.”

After his trip, he returned home and told everyone—much to their surprise!—that he was moving out west.

He viewed this new chapter as a fresh start, and began to seriously contemplate a long-time dream he’d held: becoming a hypnotherapist. Hypnotherapy had done so many wonderful things for him and he felt called to do the same for others. As if tuning in to his thoughts, people around him began to comment on his calm demeanor and soothing, deep voice.

“Who tells people that?” he asks, “It seemed to be something I needed to hear.” 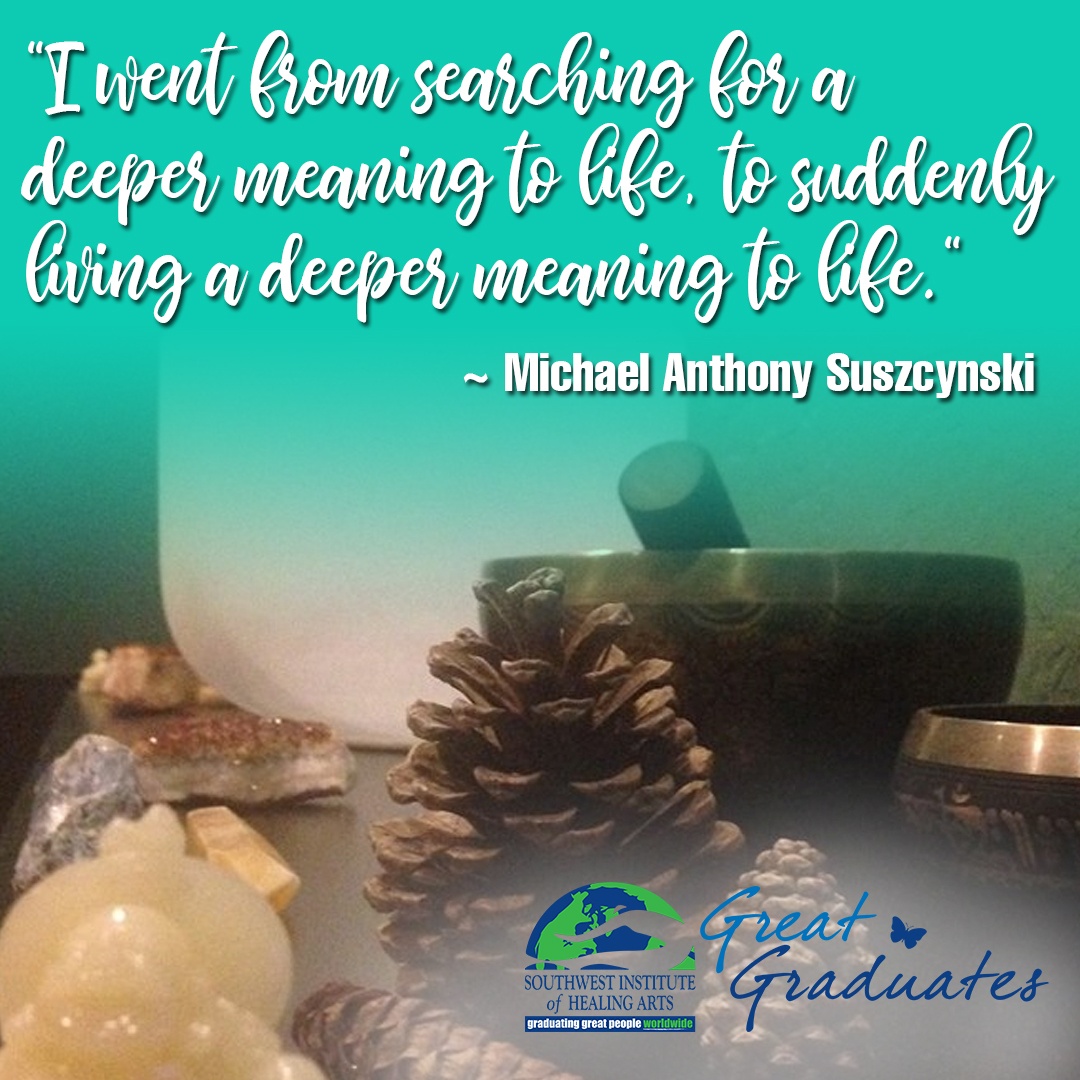 It was enough confirmation for him. Michael arrived in Phoenix and, almost immediately, discovered Southwest Institute of Healing Arts. He know it was time to live his vision and start helping others find freedom and independence by working with them to release their emotional and physical pain.

Michael enrolled in the Mind Body Wellness Program specializing in Hypnotherapy and Life Coaching, and also took many Reiki and Polarity classes.

“SWIHA completely changed my life. For the first time, I was surrounded by like-minded individuals and met teachers who I aspired to be like. I finally had living, breathing role models who were there to assist me to where I had a burning desire to be.”

In his Life Coaching classes, Michael learned how to best utilize his natural gifts and unveiled many more that he hadn’t realized he’d possessed. He was finally presented with the opportunity to become his true self.

“My favorite teacher, by far, was Linda Bennett,” gushes Michael, “Linda was always there for me during the hypnotherapy classes—which were my favorite [classes]. Linda showed up in an authentic way and made the concepts easy to understand without diminishing their impact. Linda impacted me and thousands of others students with her open hearted teaching style. I cherish Linda to this day!”

In his own words, Michael’s greatest lesson was “just show up”.

“Many times we get into our heads and we tap into the fear of what we can or can’t do. When we just show up, we show up with our uniquely qualified gifts. We may be nervous that we are not good enough, when all that was needed was to just show up and listen to someone. Just show up as you are, because you already are enough.”

Michael has turned his natural ability to see the signs of guidance that the universe provides in to a coaching business, The Spiritual Health Coach.  He uses an intuitive coaching style, hypnotherapy and energy work along with his experience with the emotional-medical connection to tune in to the blocks that may be causing the concern. He’s also begun business coaching, helping big decision-makers that affect the lives of hundreds and thousands of employees, as well as working on two books, a screenplay, and a podcast. And, if that’s not impressive enough:  his healthy, low-glycemic pecan butter with herbs and nutrients will soon be hitting the shelves of local stores !

His goals are not all career-oriented, however.

“I have a goal to help as many people as I can,” says Michael, “there is no ‘off switch’ for my goal in my life.“

Through his own journey, Michael found that the act of pursuing his dreams is what brought him the most meaning. By being open to adventure and unafraid of the unknown, he found that he recieved exactly what he needed.

“This isn’t about getting something from an experience,” he explains, “this is about stepping in to something that moves you. Innocent passion allows our inner magnet to connect with people and experiences that bring us further along this path. When we have innocent passion life suddenly becomes magical.”

The one thing Michael wants to share with future SWIHA students is this:

“There may be times you have a gut feeling or a knowing, but you’re afraid to follow that feeling. In that case, lean into the feeling…you eventually stumble forward with momentum and end up going much further than you imagined. Trust yourself and your feelings.”