Hypnotherapy, often referred to as guided imagery, is a powerful instrument for healing. It works within the subconscious mind of an individual, helping to resolve issues such as chronic anxiety, weight gain, fear and insomnia. It can also help change negative or addictive behaviors.

Bob Chamberlain, a graduate of the 100 hour Certificate of Excellence in Hypnotherapy at Southwest Institute of Healing Arts (SWIHA), has an undeniable passion for hypnotherapy and guided imagery. Once Bob completed his 100 hours of training at SWIHA, he immediately took his skills and experience to Banner Estrella Medical Center in Phoenix, along with SWIHA’s Hypnotherapy Program Director Linda Bennett.

In January of 2015, Banner Estrella launched a pilot program called the Guided Imagery Project. This is a volunteer based program in which Bob immediately began volunteering, along with a dozen other graduates from SWIHA’s hypnotherapy program.

Most traditional, or allopathic, doctors and medical centers have not previously used holistic or integrative therapies like hypnotherapy with patients. However, recently the use of more holistic therapies such as hypnotherapy, massage therapy and even yoga have proven beneficial for helping patients.

“Banner Estrella is taking the lead with using integrative therapies,” says Linda Bennett. “When the program started there were two units involved. Currently there are five units, and by June we will be adding the ER to the group of units offering guided imagery to patients.” 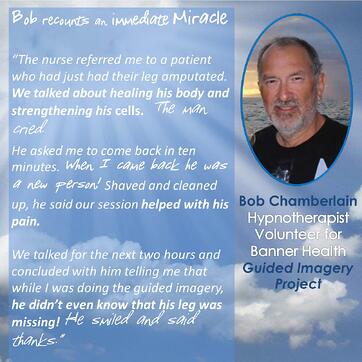 A few years ago, Bob was in the hospital experiencing health issues. While studying hypnotherapy at SWIHA, he recalled how he felt during the time he was in the hospital, and just knew that if he had known about guided imagery back then, it could have helped his health immensely. So, Bob began to volunteer his time at Banner Estrella with Linda and his fellow SWIHA grads.

Bob works regularly with patients, talking to them and using his hypnotherapy skills. His SWIHA training prepared him for work like this, because he was taught how to create hypnotherapy scripts to incorporate into his sessions. The tones of these scripts are healing in nature, and often help to relieve any anxiety patients are experiencing. The patient is given the option to choose which script they would like to go through with Bob, and their level of pain and anxiety is measured before and after the script reading.

“The patients are usually in pain or have surgery anxiety when we introduce them to guided imagery,” Bob explains. “They have a relaxed posture and may fall asleep after we start, as well as the family who sometimes stay in the room. When we finish the script we ask questions to measure their pain level, which is usually cut by 50 percent.” 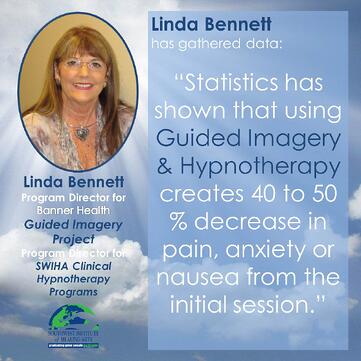 Linda backs up this statistic. “Data has shown that using guided imagery and hypnotherapy creates a 40 to 50 percent decrease in pain, anxiety or nausea from the initial meeting.”

In March of 2015, Bob’s good work was honored by the Banner Estrella staff when he was nominated for and received the Banner Estrella STAR award. “I was completely surprised and couldn’t believe it,” Bob says of the nomination. The award was well earned; Bob’s volunteer work has touched the lives of many patients.

Creating and building an integrative therapy program into a medical facility such as Banner Estrella is an innovative new way to bring holistic healthcare into a traditional medical environment, and it has been well received by patients and staff alike. In the short time the SWIHA team has been working with the patients, there have been countless success stories from patients who completed one guided imagery session and noticed countless changes in their levels of pain and anxiety.

Bob recounts one patient in particular who he was able to help almost immediately.

“I had a patient who had just had their leg amputated. The nurse referred me to his room. I went in and introduced myself and asked if I could do a guided imagery session with him. He agreed. We talked about healing his body and cells and finished in a very relaxed state. He cried emotionally and asked me to come back in ten minutes. When I came back he was a new person! He had shaved and cleaned up. He said our session was great and helped with his pain. We talked for the next two hours and concluded with him telling me that while I was doing the guided imagery, he didn’t even know that his leg was missing! He smiled and said thanks.”

The results have been so profound that doctors at Banner Estrella are now calling and requesting that SWIHA volunteers work with specific patients based on their needs. Previously, the volunteers would visit the medical center and work with whoever was willing to work with them at that time.

“This is the most exciting thing I’ve ever done in my life!” Bob exclaims about the volunteer program. “To sum it up, the program allows me to use my gifts to listen and show compassion for a brief moment in a patient’s life during difficult times. I am grateful.”