StevieAnne Petitt is well on her purposeful path to be an internationally-known and well-received Conscious Comedian and Inspirational Speaker. Stevie’s comedic approach to conscious living prompts her audience to “Lighten up Enlightenment”, finding the humor in this human experience!

Stevie’s journey has been nothing shy of miraculous. She lived in foster and group homes after childhood abuse that resulted in her becoming a ward of the state. Stevie remembers being divinely-guided by one or two mentors at each significant turning point in her journey. “Looking back now, I find that every event was divinely orchestrated to bring me to who I evolved into today. I have the vague memory of several mentors, counselors and therapists whose brief comments of praise and inspiration fueled me for months and motivated me to dream big.” 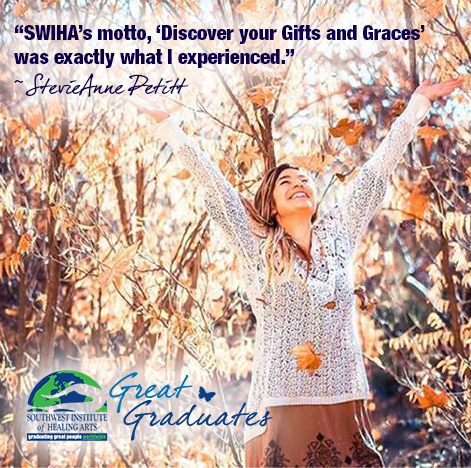 Despite occasional hospitalizations for suicide attempts, Stevie found that she was most herself when she was writing and using humor as her means of healing. Whether it was a facilitated group meeting among peers or a session with her various psychiatrists, her enthusiasm for life would show up whenever she was able to use metaphors or comedy to re-create the scenarios she was asked to dive deep into and make sense of. “It was so interesting. I recall even the most stoic of therapists laughing almost uncontrollably at my somewhat crass yet comedic approach to really dark, deep topics. Their expression humanized our sessions and I always kind of felt like that was the one area in which I could express and feel lovable and good enough. I learned that humor was what made me special and worthy of existing.”

This mostly-tactful transparency was seen as a strength that would serve Stevie well in the “real world”. At 16, the State of Virginia granted Stevie emancipation, enrolling her into a state-funded apartment living program, where she attended Summer School for ten hours a day, graduating early at the age of 17 and joined the United States Navy, where she served as a Military Police Officer for just over eleven years, honorably discharging at the age of 29 in July 2013.

Stevie was deployed for nearly eight years, specifically serving as an Anti-Terrorism and Force Protection Officer during Operation Enduring/Iraqi Freedom, as well as, other Operational Assignments. She met thousands of people, visited numerous countries and married a wonderful man whom with she now co-parents their children, Caleb (7) and Ava (6). At the age of 29, Stevie had nearly twelve years in the service which was often seen as a guaranteed “20-year Veteran” lifestyle, however, Stevie didn’t feel as though that was her intended path. “I didn’t know what the next step was. I simply knew that it wasn’t serving me or my family to stay. I began an inventory of all the skills I attained while in and although law enforcement seemed like the easiest transition, it didn’t speak to me either. I then focused on the collateral duties I took on as a mentor to many junior troops throughout each command. I was instantly flooded with emotions of joy and inspiration when I remembered fulfilling such a role for each protégé. I looked up “Mentorship in the Civilian Sector" and Life Coaching showed up. I was instantly drawn to SWIHA’s website”

As she read about Life Coaching, it resonated with all that inspired Stevie. Summing up all that she had been exposed to as a youth, and in turn, what she offered as she grew into as a seasoned service member. “Within ten days of honorably discharging from the military, my family and I moved from California to Arizona and I started my program, a 2-year Mind Body Wellness Transformational Psychology degree, with courses in Advanced Life Coaching, 300 hours of Hypnotherapy, Yoga Teacher Training and Holistic Nutrition.” 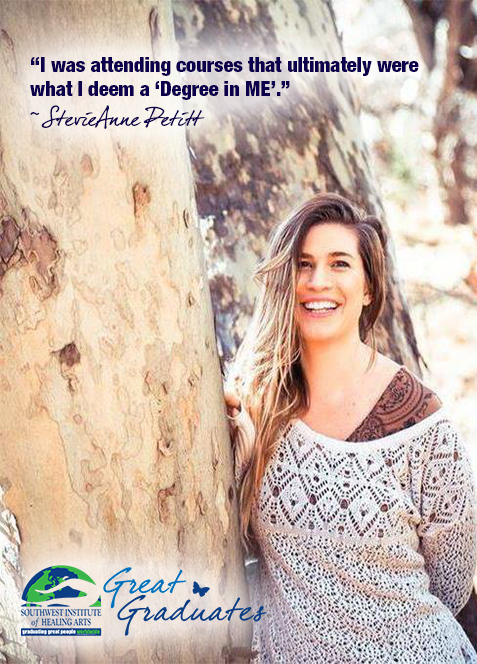 “My journey has been so fascinating because I truly am one of many poster children for SWIHA. SWIHA’s motto, ‘Discover your Gifts and Graces’ was exactly what I experienced. Here I was attending courses that ultimately were what I deem a ‘Degree in ME’. I was not just sitting in a chair expressing and having another tell me what they concluded. Rather I was invited to be an observer. I was empowered to believe in myself and trust that the answers were and have been within me all along. This way of teaching was so open and encouraging that I was excited to explore what made me Stevie. As I showed up for class, I felt more and more comfortable with everything that had transpired up until that present moment. Most importantly, the culture and community at SWIHA is so supportive of expression that I found it effortless to BE myself, to show up as the ‘Greatest Expression of Self’. Oftentimes, cracking jokes or inserting puns mid-lesson, which were always well-received by the staff and fellow peers and even applauded, it became so easy to just BE myself and love myself because of the appreciation that was reflected back to me afterward. It then hit me! My gifts were with me all along -- humor and creativity. And I could, in fact, embrace SWIHA’s mission to ‘learn to use them in loving and profitable ways’ as a Conscious Comedian.”

Within months of attending SWIHA and embracing every second within the halls to openly and vulnerably express, Stevie not only became aware of her gifts, she also was able to work alongside the staff at the Success Center to physically manifest her passion into a purposeful practice! Stevie founded Begin-Being, LLC just 6 months after enrolling. With each class, she would walk away with information that she would spin into her own articles and blog posts, supporting her overall business model – to “Lighten Up Enlightenment”.

Just one year into her program, she accomplished one of her greatest achievements to date. Stevie used her gifts of writing and wit to publish her first work, “Egos Are Like Farts… a comedic approach to conscious living” where she used metaphors between the two to encourage “Conscious Cropdusting”. “My peer, Brett Black, and I were joking in class and what started as one off-the-cuff joke later that night became a 3am wakeup call with several comedic comparisons that I could not deny were divinely-downloaded! The next day, I jokingly presented the material to one of my greatest mentors and SWIHA staff, Elmas Vincent, who encouraged me to publish it! It was that’s simple. I just did it, step-by-step. Having fun and enjoying the process without much focus on the future result. Brett illustrated each chapter with an ideal set of characters and it was published on June 3rd, 2014. This was one of the most noteworthy moments of my life, to see this IDEA come to physical fruition. To know that a creative thought became a tangible and purposeful product that to this day I can still revisit and acknowledge as a Divine mission, orchestrated by the Infinite Intelligence we all uniquely relate to.”

The book was just the beginning. Stevie took her content to the stage of the infamous Tempe Improv where about seventy-five SWIHA students and staff gathered to support her first and second show. Stevie also began blogging consistently, reaching out to like-minded mentors in the metaphysical community. She got the attention of one of her top mentors -- #1 New York Times Best Selling Author, Pam Grout, -- who not only wrote blogs featuring Stevie on three separate occasions, who also endorsed Stevie’s book! Just weeks after doing so, Pam Grout gifted Stevie with tickets to the infamous Hay House “I Can Do It” Denver Conference where she invited Stevie up to share her book’s content in a stand-up set with hundreds of attendees! 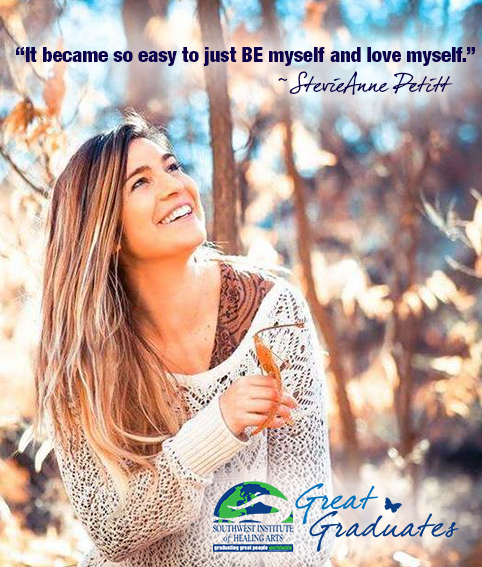 The book’s content and Stevie’s light-hearted approach to enlightenment has been well-received and earned her even more opportunities to expand her brand and voice online, including a series of radio show interviews for Vets on Media with Jesse James Garretson (a SWIHA alum), Ask Aandra “Tune into your Truth” , the six-figure business coach Aandra Bohlen, and “Get Out of Your Own Damn Way” with Krylyn Peters (another SWIHA alum). Blessed to work alongside the very staff that has supported her all along, Stevie has stepped up to also co-facilitate several successful workshops with Natalie McGovern, a long-time SWIHA instructor, and most recently Stevie was co-featured as a well-attended “Gifts and Graces” presentation titled “Puzzle Peace” with James Patrick, one of the Success Coaches at the college.

“One of the most extraordinary and influential moments I have had to date was standing before four of the most well-respected and highly-regarded mentors within the metaphysical community pitching my gifts and graces – there I was, presented the idea of ‘Conscious Comedy’ to angel investors KC Miller, Sunny Dawn Johnston, Randy Davila and May McCarthy. As the room lit up with laughter and I received confirmations from each panel member that I was undoubtedly on my purposeful pat, I could hardly believe that SWIHA had, once again, hosted a national event and chosen me as one of seven presenters to pitch my passion, earning me direct guidance from these top teachers. Their guidance and respect solidified my passion and purpose.”

Stevie’s ever-evolving journey has also earned the attention of documentary filmmaker, Ann Cabano of Ann Cabano Films, where they are currently working on a film with the working title, “Unfilthy: One Woman’s Transcendence from Abuse and Promiscuity to Innocence and Laughter”.

“My purpose-filled path is lined with miracle after miracle, and has been divinely supported all along. It was the halls of SWIHA that served as a catalyst in my transformation. Each class, and all the self-work I was invited to do inspired and catapulted me into a space of self-awareness, compassion and love. The experience opened me to showing up as the greatest expression of myself – vulnerably and unapologetically. One-by-one, old patterns and belief systems that suggested I was “not good enough” or “not lovable” melted away with every exercise, session and conversation. I was overwhelmed with an abundance of support and praise -- I had no choice except to absorb it and move forward in faith that I am purposeful just as I am.”

Stevie’s dream career is to open as a headliner for keynote speakers for those who have inspired her journey thus far. Using ‘Conscious Comedy’ to entertain and inspire the masses, Stevie believes that her content acts as a back-door approach to healing while creating an atmosphere that truly invites an openness and receptivity to conscious shifts within one’s self. She has a strong social media presence and shares her journey through humorous and inspirational posts and videos on every outlet available. Thrilled to consciously collaborate, she can be reached for bookings or just genuine, jovial engagement via her website stevieanne.com and email stevie@begin-being.com. Connect on social media too! Facebook and Instagram