Since its humble beginnings on a mountaintop in Japan, Reiki has been adapted into varying cultural traditions across the world. In fact, it is estimated that there are over a hundred versions or expressions of Reiki. So, why are there so many forms of Reiki? 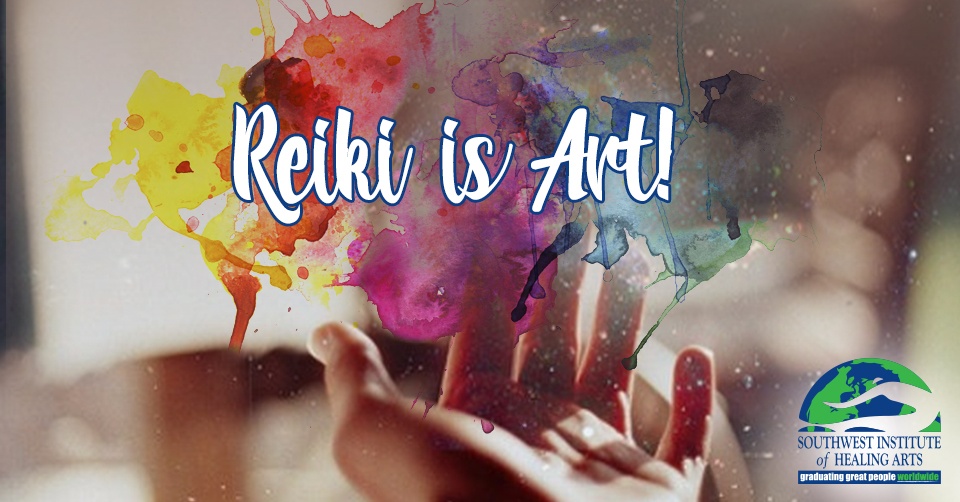 Both Reiki and art are abilities that come naturally to some… and many practitioners of both Reiki and art find training is necessary to help them refine their endeavors and learn specialized skills that makes them more effective, productive, and even more passionate about their work.

When it comes to Reiki, the key to success is in discovering your personal style and finding a master teacher who you admire and respect to train you. As the Spanish painter, sculptor, printmaker, ceramicist, poet, and playwright Pablo Picasso once counseled, “Learn the rules like a pro, so you can break them like an artist.”

The Rules of Reiki

Every approach that is currently being practiced under the name of Reiki can be traced to three healer/teachers:  Mikao Usui, Chujiro Hayashi, and Hawayo Takata. The rules—or “expressions”—of Reiki have been passed from teacher to students (and students-turned-teachers) with a wide variety of adaptations and augmentations along the way.

The Buddhist monk Mikao Usui was the originator of what we now call Reiki– a Japanese word translated to mean “spiritual energy.” According to tradition, Usui discovered Reiki on a mountain in Japan while seeking a closer connection with the Divine. The earliest influences upon Usui came from his martial arts practice, Shugendo (or "spiritual mountain practice," the "path of training to achieve spiritual powers”), and his study of the Lotus Sutras (known for its extensive instruction on the concept of kleshas, or the mental states that cloud the mind and manifest in unwholesome actions and states of mind, like anxiety, fear, anger, jealousy, desire, and depression).

The intentions of the early teachings of Reiki was to first heal the self and become whole and then to serve others. Usui used head positions only, treating any problem area on the body for physical, emotional, and mental dis-ease. Once he made the decision to train others in Reiki, he also called upon his training in martial arts to accentuate the practice. In the Japanese martial arts culture, “maai” is the art that integrates space, time, and dimensions of being-ness. It is a process, or initiation, passed from Martial Art Master to student to attune them to them to the metaphysical principles of time and space– or non-space.

Passing of “maai” is a powerful spiritual experience. Reiki attunements involve a Reiki Master Teacher seeking to connect the student’s energies with the spatio-temporal continuum. The process involves guiding the “Rei,” or God-consciousness, and “ki,” or spiritual energy, to and through the student. 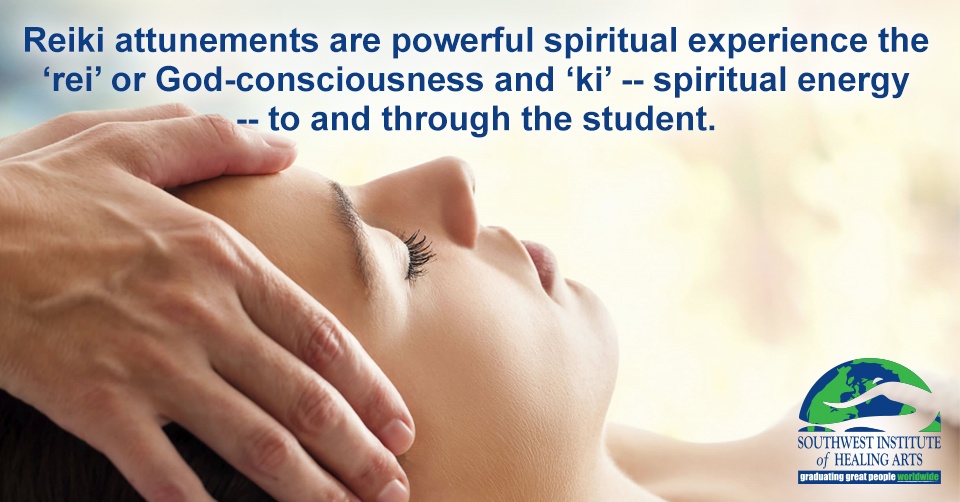 Dr. Chujiro Hayashi, a disciple of Reiki Master Usui, played a major role in the transmission of Reiki out of Japan and in turning it into a less mystical practice. Dr. Hayashi was a naval physician and employed Reiki to treat his patients, both military and civilian alike. He is likely the originator of the hand position system used here in the West. It is believed there were originally seven to eight hand positions covering the upper body only; this was based on the Eastern traditional healing theory that the "body" is the head and torso. Therefore, it was believed that it was only necessary to treat the head and torso in order to treat the entire body and mind. The limbs are considered “external,” which cover major energy centers or acupuncture points, and the energy will flow through the body and to the arms and legs using meridians lines.

Dr. Hayashi’s further hand positions cover the whole body to give a better overall flow of energy. This information was compiled in his own 40-page manual on how to use the hand positions for certain ailments, which was passed down to his students. During his work with Reiki, he initiated between seventeen and twenty-two Reiki Masters, including Mrs. Taketa, who brought Reiki to the United States.

Hawayo Takata was born in Hawaii to hard working Japanese immigrants; she married and was widowed by the thirty-four, leaving her to raise her two daughters alone. In order to provide for her family, she had to work very hard with little rest; after five years of this, she developed severe abdominal pain, a lung condition, and had a nervous breakdown. After a death in her family, she traveled to Japan and came in contact with Dr. Hayashi's clinic, where she began receiving Reiki treatment. Daily treatments, twice a day, resulted in her getting progressively better; eventually, she was healed altogether. Once healed, Mrs. Taketa decided that she wanted to learn Reiki to help heal others.

Mrs. Takata returned to Hawaii in 1937 and was followed by Dr. Hayashi shortly thereafter to help establish Reiki in Hawaii. Hawayo Takata was the last Reiki Master Dr. Hayashi initiated.  Before her transition in 1980, Madame Takata initiated twenty-two Reiki Masters herself and established some very firm guidelines and protocols, or “rules,” she deemed important for those in North America to follow when practicing Reiki. 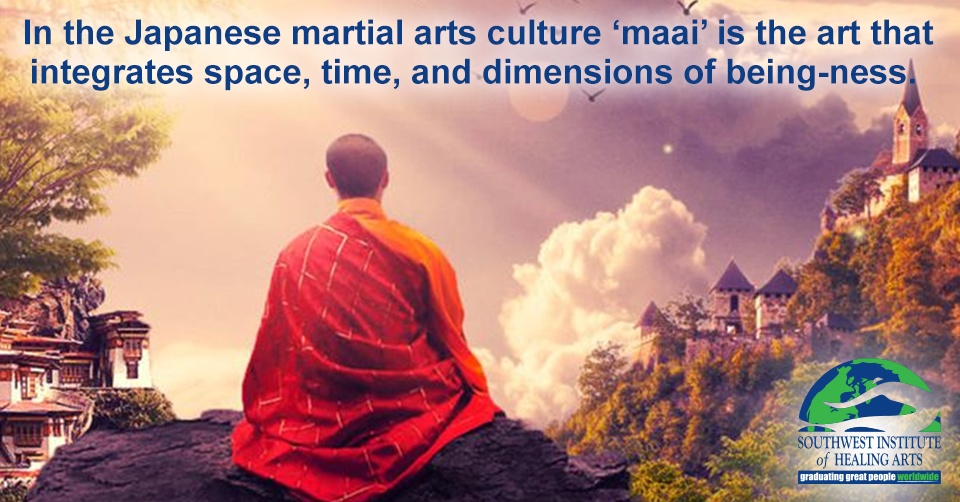 Some of the traditional rules set forth included keeping the Reiki symbols secret until the student progressed to Reiki Level II; that a minimum of 21 days must pass between Reiki I and Reiki II attunements; and that the hand positions must be adhered to as the traditional protocol for Reiki sessions.

In the two decades since Madame Takata transitioned, Reiki has spread rapidly in the West and East and is now practiced throughout all parts of the world. There are now thousands of Reiki Masters and millions of people practicing Reiki throughout the world; some who are descendants of Madame Takata’s lineage are even teaching Traditional Reiki at Southwest Institute of Healing Arts in Tempe, Arizona!

Another Reiki Lineage — “Directly Handed Down”

In addition to initiating Madame Taketa, Dr. Hayashi initiated Chiyoko Yamaguchi as a Reiki Master; she lived in Kyoto, Japan, practicing and teaching Reiki until she died in 2003. She initiated her son Tadao Yamaguchi, and together they cofounded Jikiden Reiki (“Jikiden” meaning “directly handed down” in Japanese). 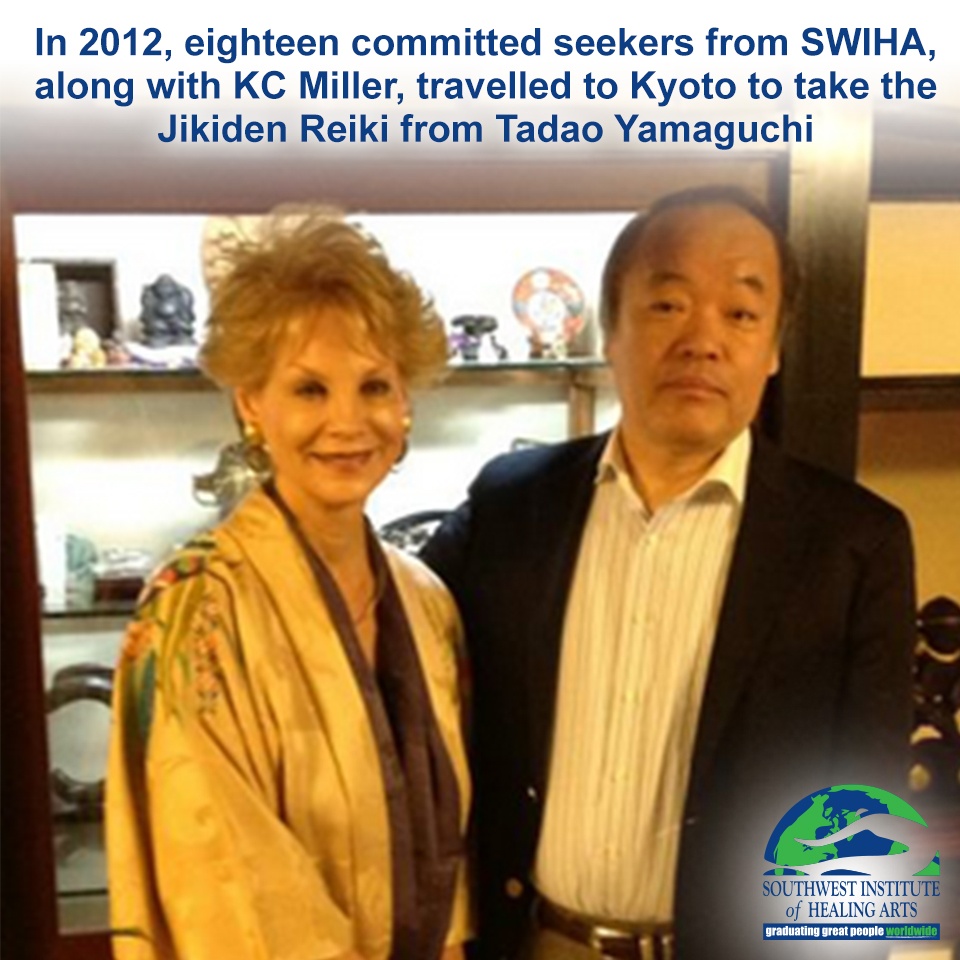 In 2012, eighteen committed seekers from SWIHA travelled to Kyoto to take the Jikiden Reiki.  Many of the “directly handed down” principles have been incorporated into Transformational Reiki as taught at SWIHA, including revealing the Reiki symbols from the start of as a way of allowing visual learners to fully see and understand the Japanese Kanji received during the attunements. In addition, Reiki I and II are together, modeled after the format used by Tadao Yamaguchi, rather than having twenty days in between attunements.

The Gokai (five Reiki principles) are emphasized in the classes taught at SWIHA, just as they were in the tiny Kyoto classroom where the wisdom is explained as “kotodama,” which is translated as “word spirit” and refers to the powerful energy inherent in certain words or phrases and the intention behind them.

Tadao Yamaguchi emphasized the concept of "byosen"—which comes from two Japanese kanji characters—Usui used to describe the buildup of toxins in the body. “Byo” can mean “ill” or “toxic,” and “sen” means “lump” or “gland.” The word “byosen” describes the toxins or stiffness that can gather in any part of the body and create blockages. Byosen blocks flow in the body; this can be blood flow, lymphatic flow, or mental energetic flow or stuck-ness. While a protocol is used, the emphasis is on teaching the practitioner to tune into the sensations they feel in their hands and to which they are intuitively guided. Tuning in to “listen” and “feel” for the subtle sensations is the mastery that is sought.

In Transformational Reiki, your relationship with Reiki grows in direct proportion to your spiritual practice and the development of your intuition. Reiki will go from being a concept and a thing you “do” to being a way of “being” in relationship with yourself, others, and the world.

Reiki as Art– and Transformation

“To draw, you must close your eyes and sing,” whispered the painter Pablo Picasso when describing the creative process of art. His maxim fully describes the Reiki Master Astarius Miraculii who was instrumental in bringing the first version of Transformational Reiki to SWIHA.

Even before the group from SWIHA travelled to Japan to learn Jikiden Reiki, Astarius helped introduce an intuitive-based Reiki, reinforced with music, sound, poetry, and personal expression, to SWIHA. Although originally from Master Takata’s lineage, in Astarius’ spiritual evolution, he was drawn to a very experiential approach to healing with an emphasis on self-expression and divine connection.

Astarius often says of a Reiki practitioner, “Like the waves in an ocean,  healers are backed by the full power of the ocean.” By this he means, “Reiki works on the many levels of consciousness on the physical, mental, emotional, and spiritual levels. It grounds the body, balances the emotions, and expands consciousness.”

The imagery often offered is, “A drop becomes a wave– and then the full force of the ocean.”  Reiki starts with the seeker, who becomes a practitioner, and then finally a Reiki Master. 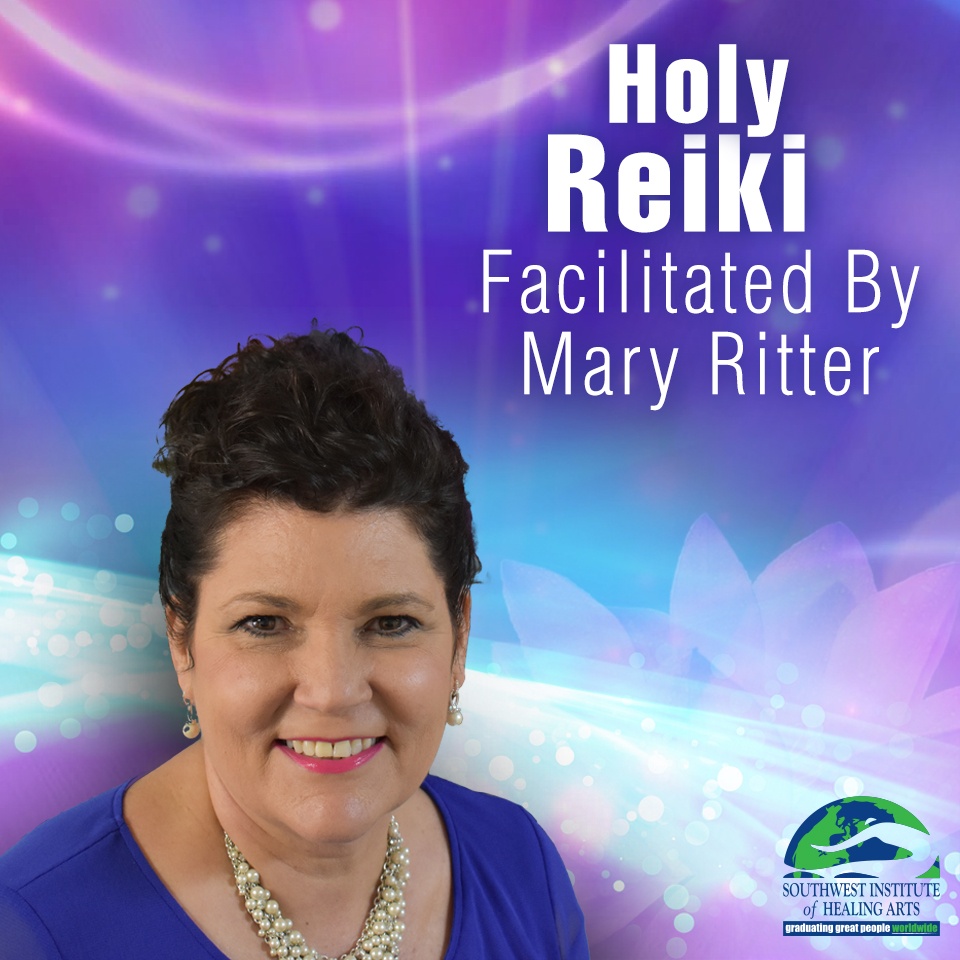 SWIHA is introducing a new offering known as Holy Reiki, which acknowledges the healing power of Christ and calls upon the name of the “most high” to create healing. This approach is Bible-based and Christ-centered, with the aim of transforming its students into an instrument in the peace and healing of others while affirming their personal connection to the Divine. Holy Reiki honors and respects all traditions, denominations, beliefs, and walks of faith and will be led by Mary Ritter.

In the first weekend of Holy Reiki I, students will practice the power of prayer and affirm their personal connection to the Divine, as well as learn a hands-on protocol for self-healing and serving others. In preparation to become an instrument in the peace and healing of others, Holy Reiki II reviews the spiritual gifts as revealed in the Bible and invites students to put on the “whole armor of God.”

The International Association of Reiki Professionals, with membership worldwide, emphasizes the following in its Code of Ethics for Reiki Practitioners:

KC Miller is the founder of Southwest Institute of Healing Arts celebrating its 25th year anniversary of helping people to discover their Gifts and Graces. Over the years KC has received many designations and won numerous awards. While these are milestones in life worth celebrating, her greatest joy and accomplishment, in her mind, is that her 'Life Light' has been used to help illuminate others 'light' and life purpose! Her personal life motto has become the healing model for SWIHA ~ Let me be an instrument in the peace and healing of others as we seek to touch lives, heal bodies and free souls!