Anyone who owns or drives a vehicle knows it runs on diesel, unleaded, ethanol or even vegetable oil. However, when it comes to providing fuel for our bodies we might not be as informed as we think.

A recent Consumer Reports study cited that nine out of 10 people surveyed thought they were eating a healthy diet, however, based on their age, height and weight, 36 percent of those surveyed were overweight and 21 percent would be considered obese.

America is one of the richest nations in the world, but it is said to be a nation of the overfed and undernourished. With certain exceptions our food issues are not as much about circumstances as they are about choosing the right foods. Obesity is a multi-factorial issue, but the main culprit of an unhealthy diet is an excessively high intake of sweets and sugary items such as cakes, cookies and pies. Drinking at least one soda a day, as well as consuming so-called energy drinks, is also high on the list of some of the most common reasons Americans are gaining more and more weight.

Time (or the lack thereof) is considered to be a big factor in poor eating habits. Individuals are working longer hours and fewer people are cooking at home. Mark Bittman, a best-selling food writer, outlined some of the reasons for bad eating habits in a story he authored, “The Truth About Home Cooking” in the Oct. 2, 2014 issue of Time Magazine. Bittman writes that Americans still eat three meals a day, but approximately 1/3 of us get at least a third of our daily calorie intake away from home. He writes: “Nearly two-thirds of us grab fast food once a week, and we get almost 25 percent of our daily calories from snacks.”

Other nutritional hazards include both dining out in restaurants and eating fast food, where portions, as well as fat, sugar and sodium content is much higher than what is deemed healthy. Fast food is not only fast, but most of the time we don’t know what we’re getting. While some fast food restaurants recently began to list their ingredients and calorie count on menus, many still load menu items with fats, sodium and sugar to make up for the lack of actual food value, which is often cited by health experts and nutritionists as next to nothing.

Nicole Matcuk, Online Success Coach at Southwest Institute of Healing Arts (SWIHA) and a Holistic Nutrition Specialist, understands the prohibitive cost of eating a healthier, more nutritious diet. She says she rarely eats out with her family.

“The biggest reason is we like to know where our food is coming from. We prefer to eat local, organic, farm to table food,” 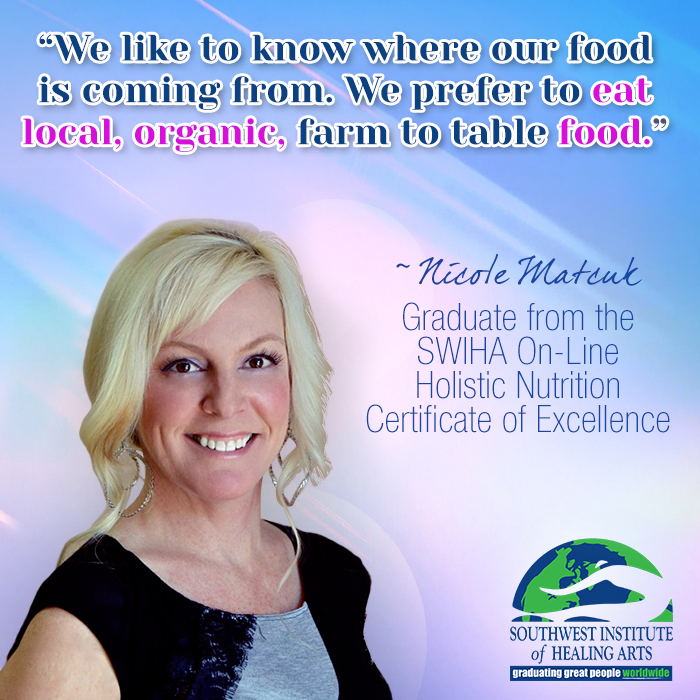 Some of the hazards from fast food and dining out include higher amounts of fat (associated with an increased risk of heart attack and stroke.) The saturated fats found in fatty beef, butter and cream can elevate blood cholesterol and clog arteries. The plaque build-up can break off, travel through the blood stream and wreak havoc on heart and brain tissue. Other fats include trans fatty acids found in hydrogenated and partially hydrogenated fats that are commonly found in commercial baked goods and fried foods. If few restaurants mention the amount of calories, carbohydrates and protein in their menu items, even fewer will mention the fat and trans fat content.

That’s why it’s beneficial to read food labels, so we know what we are putting into our bodies. Matt Bialach, one of SWIHA’s Online Academic Advisors says that he and his wife, Bernadett, became “obsessed” with reading food labels after watching popular nutrition documentaries such as Food, Inc. and Fat, Sick and Nearly Dead.

Unfortunately, prepackaged foods can be just as hazardous to our health as dining out as they tend to be high in sugar and salt. Sugar comes in many forms and may be listed as fructose, sucrose, corn syrup and molasses. Sugars provide empty calories that lack nutrition and increase the odds of becoming overweight or obese. The American Heart Association recommends that women limit sugar to 6 tsp. per day, and men avoid eating more than 9 tsp. per day. Sodium intake should be 2,300 mg per day, but most Americans consume 4,000 to 5,000 mg in any 24-hour period.

“The more we researched, the more we were appalled by the food that we had been eating, and the smaller our grocery list got,”

Bialach and his wife completely changed their way of life; they became vegan and went on a month-long juice cleanse, resulting in weight loss, more energy and lower blood pressure and heart rates. His wife Bernadett even began participating in marathons. 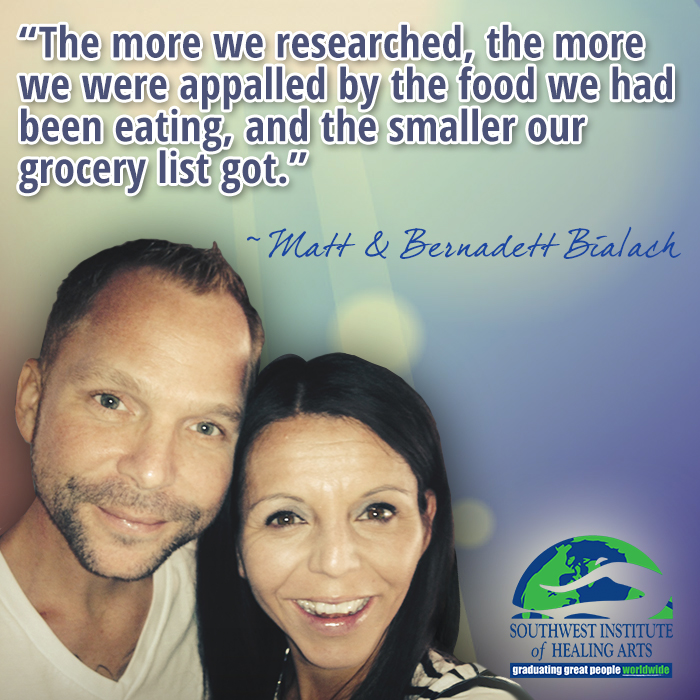 However, not all food news is bad news. Good choices for a healthy diet include water, fruits, vegetables, whole grains, Greek yogurt, cheese, eggs and seafood such as cod, salmon, sardines, scallops, shrimp and tuna.

The key to eating a better diet is to become well informed on holistic nutrition. Food for thought is more than a phrase at SWIHA – it’s a way of life. Students can enroll in a variety of on campus or online courses that go into extensive detail about nutrition and holistic health.

SWIHA offers a 200 hour Holistic Nutrition Specialist Certificate of Excellence, where students learn how to make healthier food and lifestyle choices, as well as how to coach others around their food and nutrition choices. This program is available online or on campus.

For more information about SWIHA’s holistic nutrition courses and programs, or to schedule an appointment with an admissions coach for enrollment, visit www.swiha.edu or call 480-994-9244.

About the Author Sally Marks