Holiday Spice and Everything Nice 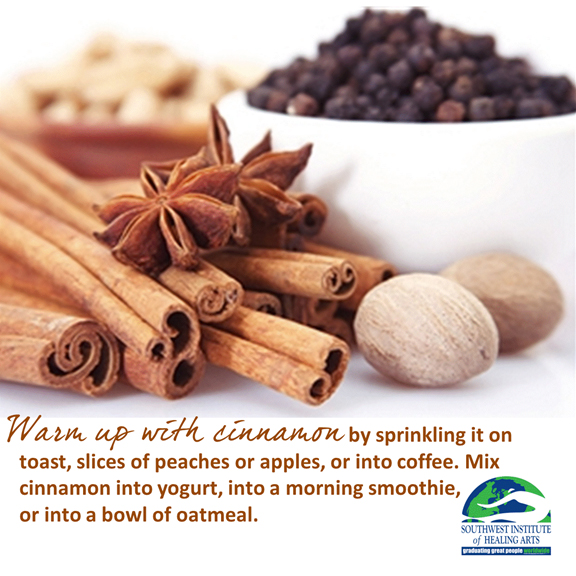 As the colder weather of winter approaches, our bodies naturally crave warm and grounding foods. Using thermogenic spices in our foods is a great way to warm our bodies and our taste buds. Thermogenic spices, such as cinnamon, nutmeg and cloves, increase the body’s core temperature and speed up metabolism. Warming spices of the holiday season have many health benefits as well—they increase circulation, support efficient digestion, boost the immune system, regulate our blood sugar levels, help with weight loss, and even ward off cancer and Alzheimers.

Spices also bring the aroma of the holidays into our homes and make recipes taste delicious. Here’s a guide to some of the best warming spices, from cinnamon and nutmeg, to more exotic spices such as star anise and cloves. Discover the healing benefits of these warming spices, and how to use them in winter cooking.

Cinnamon is one of the oldest known spices, dating back to Biblical times. It also appeared in the Chinese Materia Medica, the most complete and comprehensive medical book ever written in the history of Traditional Chinese Medicine. Cinnamon was used in ancient Egypt as a medicine and to spice beverages. The spice comes from the aromatic brown bark of the cinnamon tree which is native to Southeast Asia and the Middle East. When dried, the bark rolls into a tubular form known as a quill (cinnamon stick), or it can be ground into a fine powder. 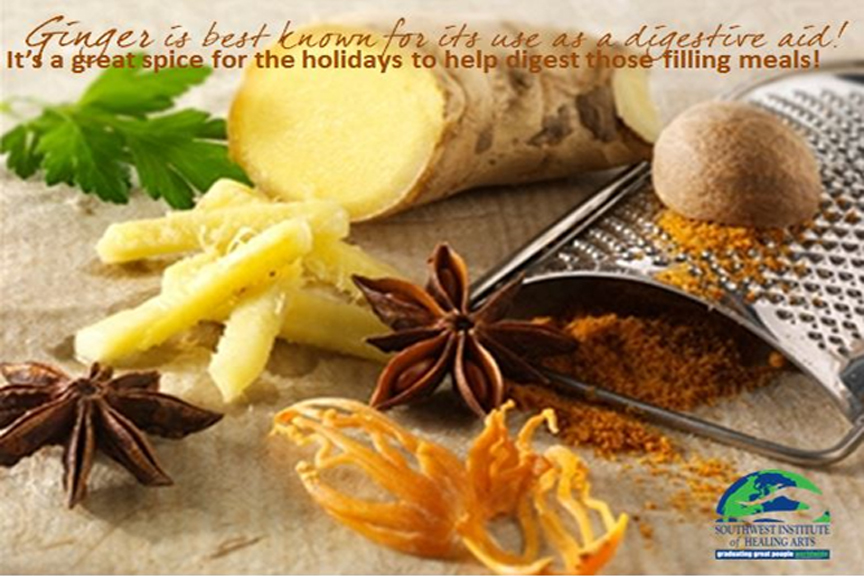 In Ayurveda, the ancient healing system of India, cinnamon is used for its warming and energizing effect. It stimulates circulation and increases the absorption of other herbs and spices in meals. Still to this day, doctors of Traditional Chinese Medicine prescribe cinnamon mixed in a tea with another warming spice such as fresh ginger, to ward off colds or flu.

Warm up with cinnamon by sprinkling it on toast, slices of peaches or apples, or into coffee. Mix cinnamon into yogurt, into a morning smoothie, or into a bowl of oatmeal. Add cinnamon to baking, into marinara sauce, soups, beans, or even rubbed onto meats or poultry.

Ginger is the knobby beige stem or root of the ginger plant. Its flavor is pungent and zesty and its effect on the body is powerful and warming. Ginger is best known for its use as a digestive aid—it relieves symptoms of nausea and vomiting, and reduces gas and stomach cramps. A great spice for the holidays to help digest those filling meals!

Ginger root can be consumed fresh or dried, and is a versatile ingredient that can be used in drinks, such as tea, or in cooking. It can be used to make foods spicy or sweet, depending on the recipe. Traditional Chinese Medicine has employed the use of ginger to promote energy circulation and increase the body’s metabolic rate as a way to treat many health conditions, especially gastrointestinal disorders.

Ginger is a potent fat fighter, as it increases core body temperature and helps burn calories. It’s warm, zesty flavor makes it one of the world's favorite spices. Fresh ginger is used as a tea or in savory cooking, while dried or ground ginger is best for sweet dishes. 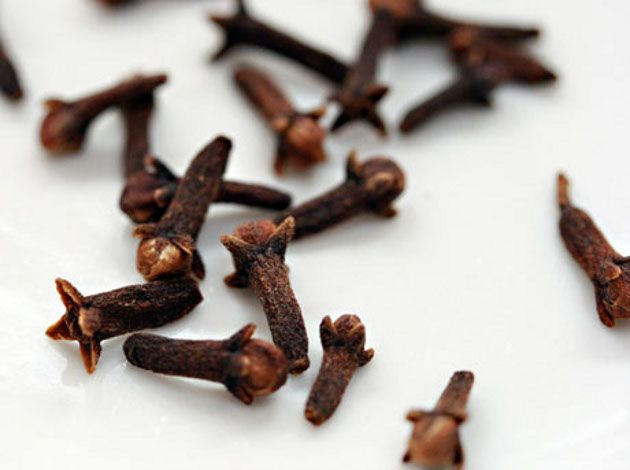 Cloves are the dried flower buds of the evergreen clove tree native to the Moluccas, formerly known as the Spice Islands of Indonesia. They are an ancient spice used in China for millennia. Dried ground cloves are well known for lending their uniquely aromatic, warm and sweet taste to ginger bread, fruitcake and pumpkin pie, while whole cloves are used in mulled wine or for studding baked hams, however cloves also contain high amounts of an active component called eugenol, which has been studied for its preventative properties against toxicity from environmental pollutants, digestive tract cancers, and joint inflammation.

A little bit of clove goes a long way, so use the spice sparingly as it can overpower the flavors of other spices. To enjoy cloves in winter meals, add ground cloves and turmeric to sautéed vegetables for an exotic flavor; add a pinch of cloves and cinnamon to warm apple cider for a nice holiday beverage by the fire, add dried cloves and cinnamon to a morning smoothie, or make a quinoa pilaf infused with walnuts, raisins and cloves. 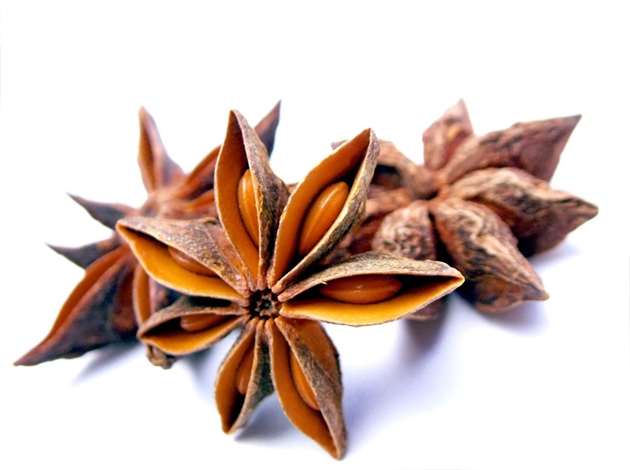 Star anise is the star-shaped fruit of an evergreen plant native to Asia that grows from northeast Vietnam to southwest China. When dried, the fruit resembles a one-inch, rust-colored star, usually with six to eight points. Each point contains a small, shiny seed.

Often thought of as the world’s prettiest spice, star anise has a sweet licorice- or anise-like flavor and has been traditionally used to spice food and as a healing herb. When brewed into a tea, star anise eases digestion, relieves stomach aches, and helps to eliminate bloating and intestinal gas. Its shikimic acid content boosts the body’s immune system to fight bacteria and viruses that are at the source of colds and flus and helps to treat asthma, coughs, lung inflammation and bronchitis

It can be added whole to soups, stews and braising broths, to which it adds a sweet licorice-peppery flavor. When used whole, it is usually removed and discarded from the dish before serving. As a ground powder, star anise makes a wonderful addition to gingerbread or spice cake and adds intrigue to apple pie. 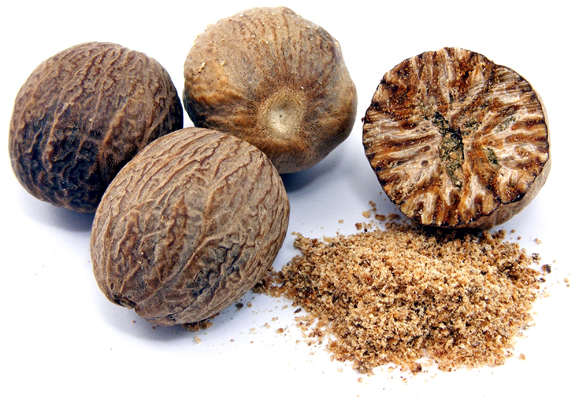 Nutmeg is a warm, delicate, slightly sweet yet musky spice that is widely used in cuisines around the world, including both Asian and western recipes. While nutmeg is a spice that should only be used sparingly in dishes, it can impact health in a variety of ways, mainly due to its array of beneficial compounds in its essential oils, which are frequently used in alternative and herbal medicine.

Nutmeg contains a compound similar to menthol, which has natural pain-relieving properties. Adding nutmeg as a spice in recipes can help reduce pain and inflammation from chronic inflammatory conditions such as arthritis. Nutmeg is also a natural detoxifer. It helps to flush the liver and kidneys of stored toxins from alcohol, pollution, and food. A great natural way to cleanse after a fun holiday event!

Nutmeg has been recommended for generations as a home remedy for insomnia. A pinch of nutmeg in warm milk can cause sleep to occur quickly. Nutmeg has a high content of magnesium, an essential mineral that the body uses to relax muscles, reduces nerve tension, and stimulates the release of serotonin—a feel-good brain chemical which creates a feeling of relaxation or sedation. Seratonin is converted to melatonin in the brain, which is induces sleep, relieving insomnia and restlessness at night. The perfect spice to add into holiday meals to help with relaxation after a busy party or event!

Sprinkle nutmeg onto a bowl of warm oatmeal, quinoa or millet breakfast cereal. It’s also nice on of scrambled eggs, quiche, omelets, pancakes, French toast and muffins. Nutmeg is especially helpful for digesting rich, dairy filled foods often found at the holiday table, which may be why it’s an essential ingredient in eggnog.

Interested in learning more about cooking with spices? Southwest Institute of Healing Arts offers nutrition courses, cooking courses and holistic nutrition programs, on campus and online! Call 480-994-9244 and ask to speak with an Admissions Advisor, or learn about the nutrition programs through SWIHA’s website. 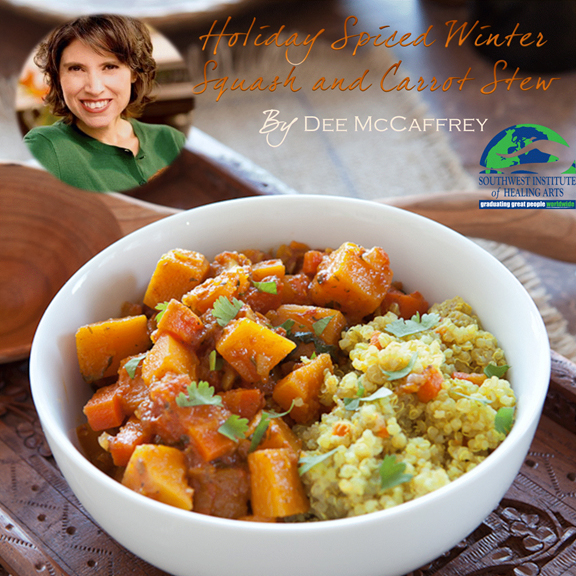 1. Heat oil in a large stockpot over medium heat. Add onion, and saute until soft, stirring often, about 5 minutes. Add garlic and stir for 1 minute. Mix in cinnamon stick and next 7 ingredients, stirring to combine.

2. Add water, tomatoes plus liquid, and lemon juice. Bring to a boil.

3. Add squash, carrots, and red bell pepper. Cover and simmer over medium-low heat until vegetables are tender, stirring occasionally, about 20 minutes. Add in garbanzo beans, stir and let cook until beans are heated through, about 5 minutes. Serve over cooked quinoa or rice, if desired.

Cut the pears in half from top to bottom, leaving the stems intact. Core each pear half by scooping out the center with a melon baller or spoon.

Add the water, honey, and coconut sugar to a 4-quart pot and bring to a boil over high heat. Stir until the sugar and honey are dissolved, then add the ginger, cloves, star anise, and cinnamon stick.

Slip the pears into the liquid and turn the heat down to a simmer. Cover and cook for 20 to 30 minutes, or until the pears can be just pierced with a fork.

Enjoy warm. They can also be refrigerated overnight and rewarmed the next day. Leaving them steeping overnight in the poaching liquid gives them a deeper flavor.

You can reduce the poaching liquid into a syrup by placing it in a wide saucepan and simmer for 30 minutes or until syrupy and reduced by half. 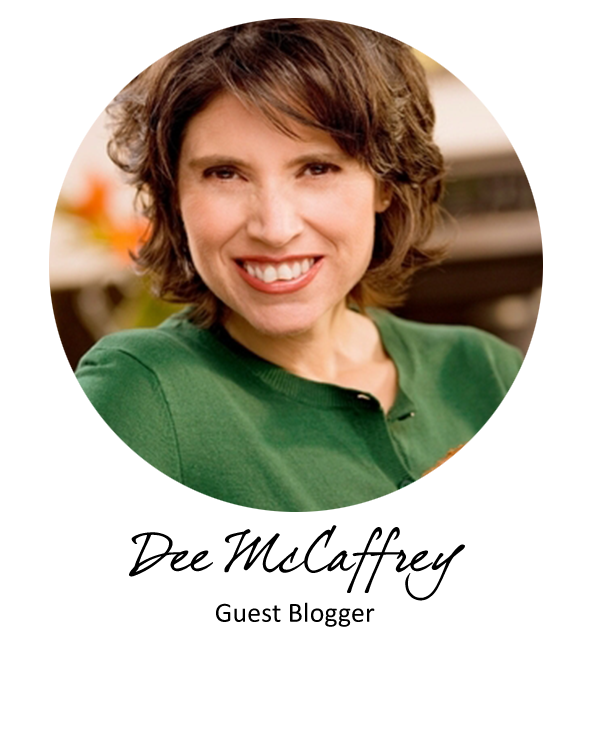 About the Author, Dee McCaffrey

Dee McCaffrey is an organic chemist turned nutritionist and weight loss expert. She is an internationally recognized author who lost 100 pounds and has kept the weight off for over two decades. Her passion lies in teaching others how to shop, cook, and eat healthfully, while serving as a role model and inspiration for sustainable weight loss and healthy living. Her book The Science of Skinny has helped thousands change their approach to food, eating and balanced health.

Dee is the lead instructor in Holistic Nutrition at the Southwest Institute of Healing Arts (SWIHA). Nutrition is Dee’s life—she lives it every second of every day. Whether she is coaching a client, writing an article, or creating a new recipe, her passion for healthful eating is the underlying energy that fuels everything she does.

About the Author Dee McCaffrey